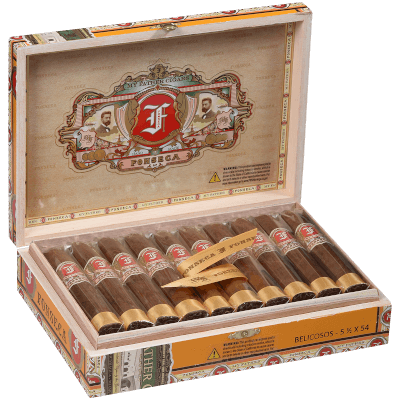 Phillips and King releases Fonseca by My Father

When a legacy Cuban cigar brand that has been on the market for over 100 years changes hands, it tends to be pretty big news in our industry. In December of 2019 My Father Cigars bought the U.S. rights to Fonseca and began a complete rework of the blend to showcase its Cuban roots and deep history.

Fonseca is named for its founder, Francisco E. Fonseca, a Cuban-born cigar maker who later moved to New York and became an American citizen.  He was known to be a handsome man and immaculate dresser who, in addition making cigars, was well known as an innovator in the cigar industry.  Fonseca came up with the idea of wrapping cigars in foil and Japanese paper. This protects the cigars from damage which you can see in our El Rey Del Mundo Oscuro line and foil wrap in Aganorsa’s JFR Lunatic line.

Fonseca started making cigars in Cuba in 1892, and was registered in 1907. It is one of the oldest brands of cigars and was reintroduced to the US market in 1974 when the Quesada family began producing them in the Dominican Republic. Fast forward to 2012 when Janny Garcia of My Father Cigars and Patricia and Raquel Quesada of Quesada Cigars collaborated on a little cigar called Tres Reynas. This paved the way for this groundbreaking deal.

This is significant, because Jaime and Pepin Garcia both rolled the Cuban Fonseca cigar in Baez, Cuba before coming to the United States and subsequently opening the My Father Cigars factory in Esteli, Nicaragua. The Garcias were very excited to reimagine this cigar for all it could be.

The result is amazing, a cigar that without a band on it might fool you into thinking it was a legit Cuban. This is a completely different kind of cigar of cigar than the previous mild versions both from Cuba and the ones the Quesada family produced.  This updated blend features a dark veiny wrapper more often associated with Cuban tobacco.  Though not as peppery as the My Father core line, it is nonetheless offers a lot of flavor to unpack.  It builds in complexity from creamy to spicy as you burn through each stage and delivers a knockout blow of nicotine intensity as you clear the last third.

Fonseca is one of the only of brands with a Cuban heritage that is not owned by one of the two big cigar conglomerates, Altadis and General. If you want to brighten up your humidor with some hot blends in the New Year, this is a good place to start.